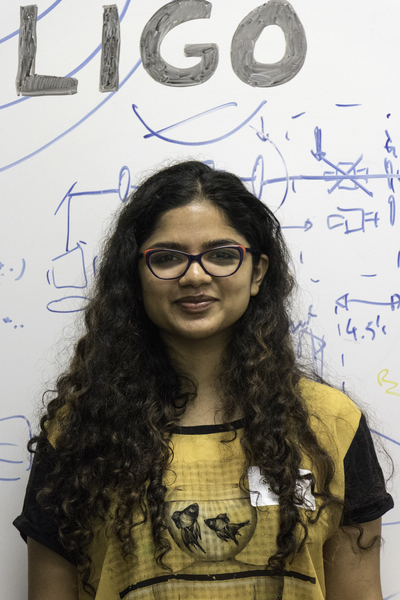 I am currently in the final year of a BS-MS Program at the Indian Insitute of Science Education and Research Mohali. Having stumbled upon physics and discovering physics research, I realised I was actually quite interested in it. I was eager to undertake this project with LIGO in order to try and wrap my head around this involved and intricate experiment that is capable of seeing things far out in spacetime that are otherwise invisible to us.

The realisation of gravitational-wave detectors with higher sensitivity demands an improvement in their Brownian thermal noise floor. In an experiment to directly measure this Brownian noise of a novel mirror coating, readout is limited by variations in bulk temperature that cannot be controlled adequately using PID thermal feedback. The use of machine learning neural networks which actively learn to find the optimal set of control parameters as a function of the state of the system is a prospective upgrade from PID. In my project, I created a physical model of the system to train potential algorithms. Initially, a simple but representative model including only a vacuum can was chosen and made into an OpenAI gym environment. On this model, I began training reinforcement learning algorithms. I also performed some experiments to obtain more accurate values of parameters and improve the model. The final aim is to train the network with real data and obtain the optimised heat actuation.

I hope to make a career out of doing physics research in the future and in the process, learn more about and possibly contribute to gravitational-wave astronomy and experimentation. I am excited about the interplay between the classical field of gravity and quantum effects in GW detectors, and the insights that LIGO and similar experiments can provide. This summer at LIGO Caltech has taught me an incredible amount about research and the skills required for it, for which I am very grateful. 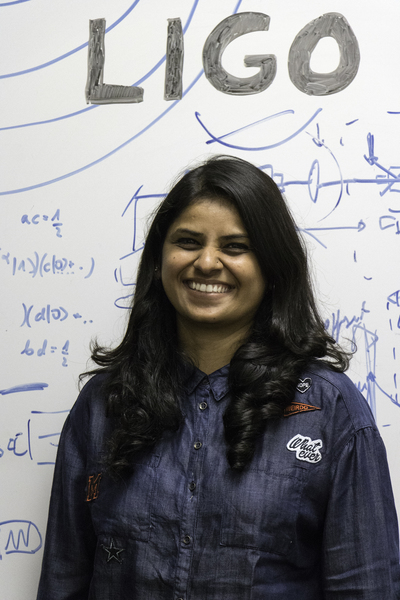 July 11th, 2012 was the first time I had been introduced to the field of gravitational waves, and ever since I wanted to be a part of it. The attraction for me in that conference wasn’t the big science about black holes, but rather the talks on LIGO detectors and the LISA mission. And I knew this was my calling! I am currently a project assistant at the Dept of Physics, Indian Institute of Science strengthening my foundations on experimental techniques in optics. Being a part of the LIGO group at Caltech during the summer was a blessing - not only did I learn new skills and concepts, but I used this opportunity to meet some amazing people hailing from different parts of the world and shared our love for science over coffee and chai!

LIGO Voyager is a third generation gravitational wave detector which involves cooling the test masses to low temperatures. Silicon is a promising candidate as it has extremely low mechanical loss particularly when cooled. Additionally silicon has zero coeffcient of thermal expansion (CTE) at 123 K and 18 K, naturally making these temperatures good choices for operating points, as thermo-elastic noise and thermal lensing are strongly suppressed by the absence of thermal expansion. However, one cannot place any temperature sensor on the cavity to maintain lock at 123 K as it would minimize the seismic coupling. This project aims to sense the temperature interferometrically and hold the cavity at zero-CTE by designing a current driver for visible laser diodes which can modulate the temperature of the silicon cavity. We sense the corresponding length modulation using the beat note of the resonating 1550 nm lasers and obtain a qualitative measure for the temperature relative to the zero-crossing. Then we construct a feedback loop by demodulating the beat frequency time series against the modulation source and feeding it back to the heaters on the cavity thermal shields, with the goal to become insensitive to first order temperature fluctuations.

I will be applying to graduate schools in the following year and down the line I hope to be a part of LIGO India! 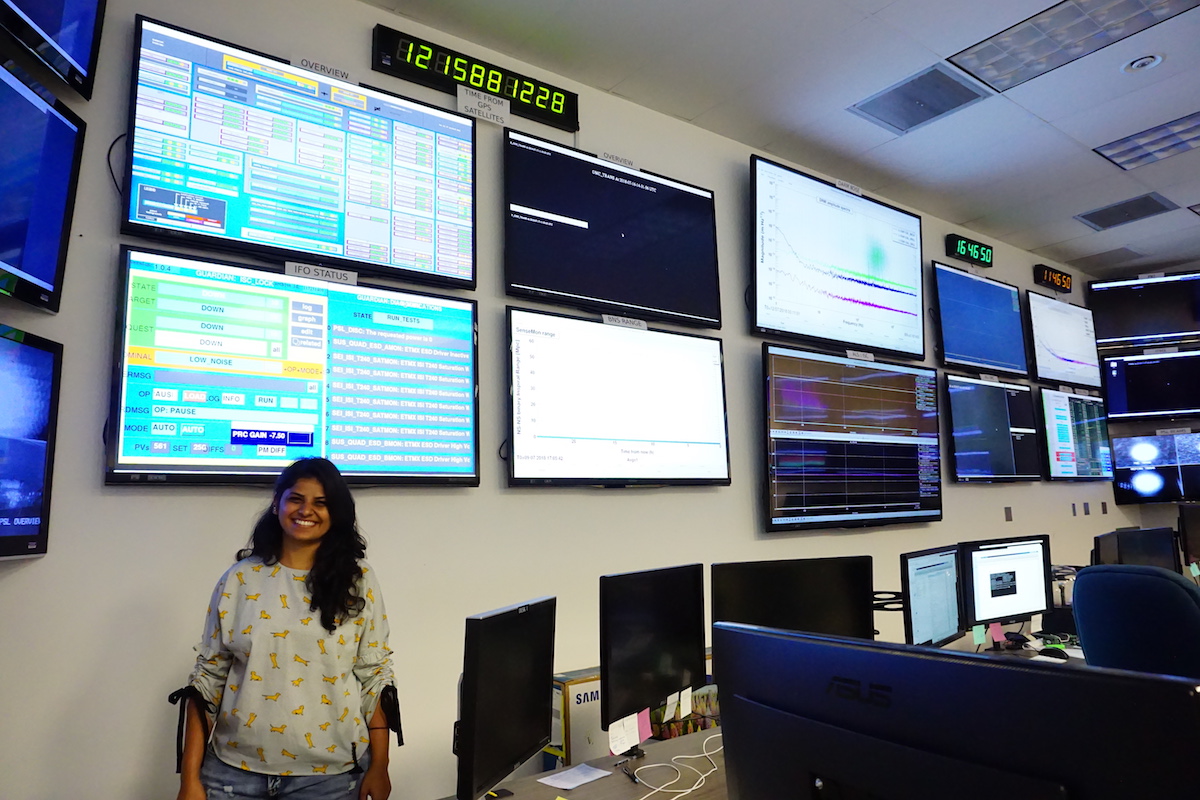 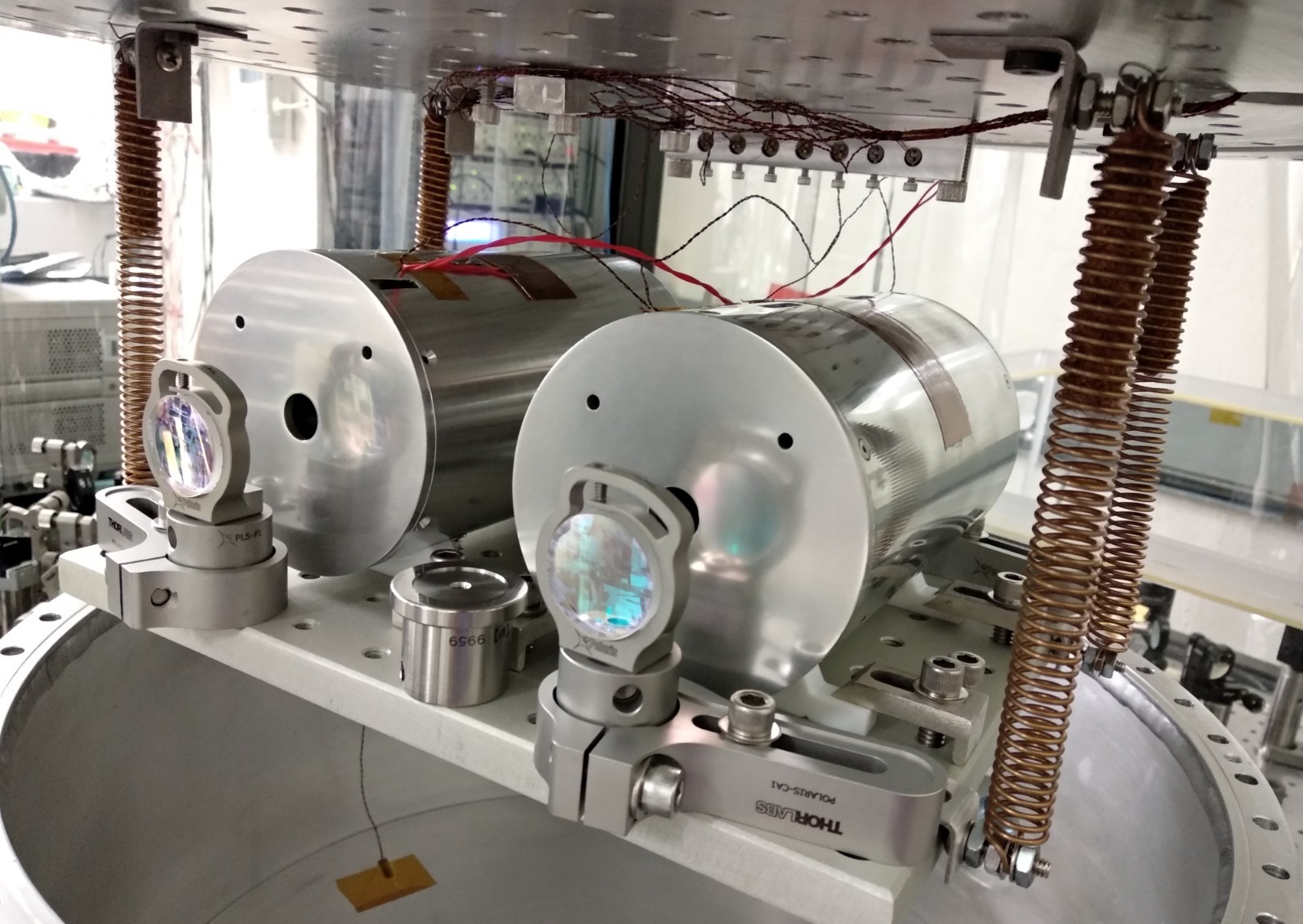 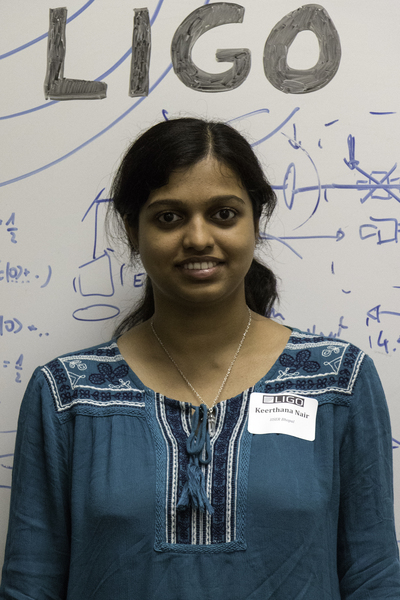 I am a final year BS-MS (dual degree) student in the Department of Physics at Indian Institute of Science Education and Research Bhopal, India. My research interest lies in the field of experimental physics, particularly in the field of Atomic and Molecular Physics. I have also explored and worked in the field of material science and terahertz spectroscopy. Previously, I worked as a summer research fellow in experimental and molecular physics at Indian Institute of Science, Banglore, India and at LIGO 40 m prototype at California Institute of Technology, California USA. These research opportunities have helped me to nurture my interest in science, develop my skills as a researcher and learn from many eminent scientists from around the world.

In the LIGO gravitational wave detectors, each arm of the interferometer is capped with semi-transparent mirrors through which the laser light gets transmitted and reflected. Any imperfection on the surface of these mirrors can result in optical power losses in the cavity. If the cavity mirrors are spherical, the modes of the Gaussian beam will resonate at frequencies which are equally spaced between each other. But in reality, the mirrors are not exactly spherical. The mirror surface contains some imperfections which we call as the figure error of the mirror. These mirror figure errors cause the resonant frequencies of different higher order modes to shift from the ideal position. The aim of this project was to use the interferometric technique to measure the deviation in resonant frequency spacing of such modes and to understand the figure error present on the mirror surfaces.

I would like to work in the field of atomic and molecular physics and ultrafast optics. Further, I would like to apply the acquired skills and knowledge to different areas of physics such as astronomical instrumentation, gravitational wave astronomy, ion trapping etc.
Expected Graduation in 2019 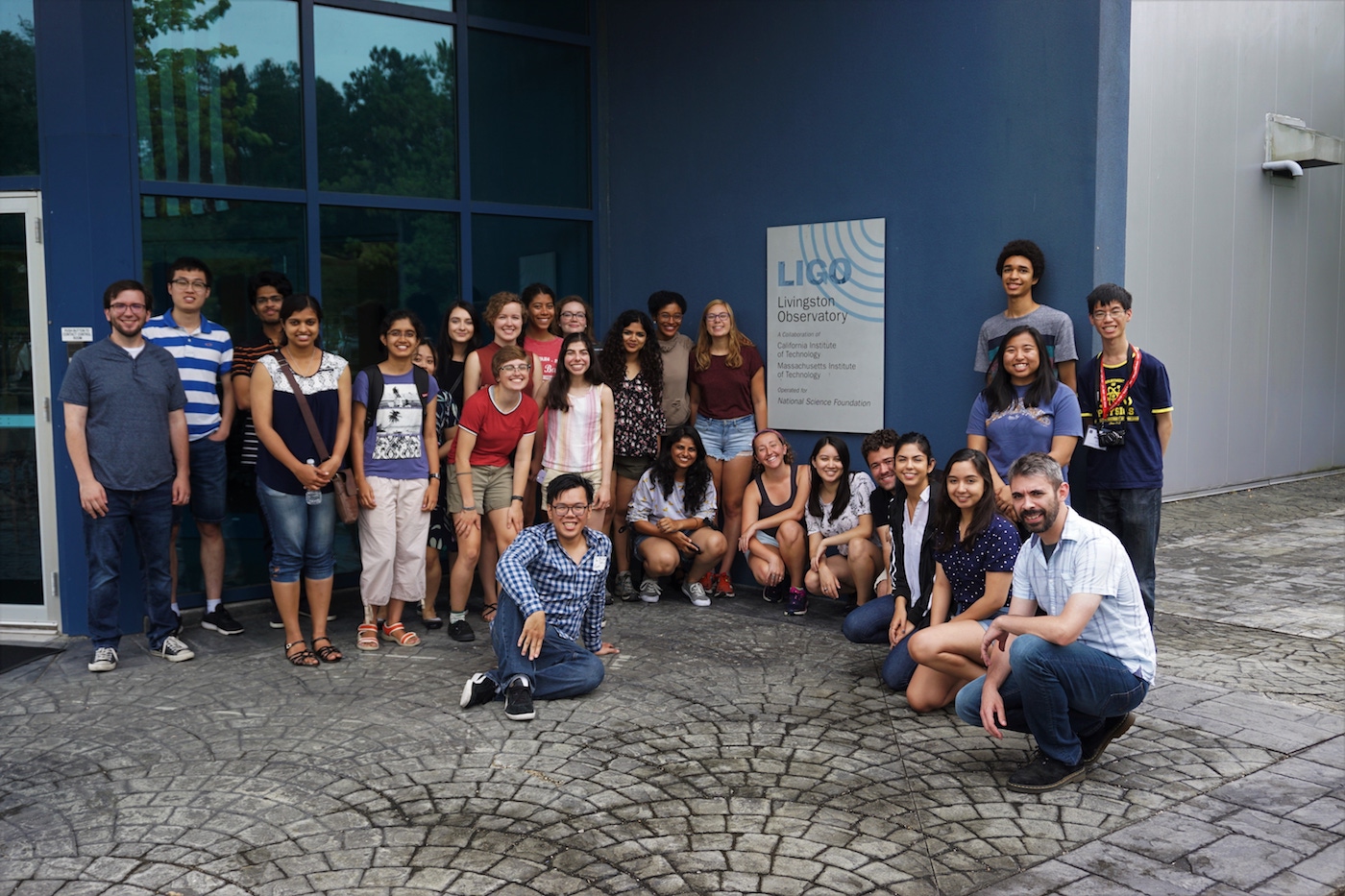 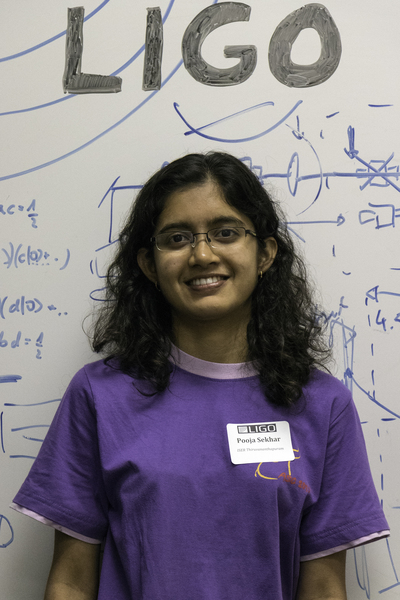 I’m Pooja Sekhar, currently a senior in Indian Institute of Science Education and Research Thiruvananthapuram. Science, especially Physics, has fascinated me since school days and this motivated me to pursue a career in Physics. I got introduced into gravitational wave physics through my summer internship on Beam Splitter Thermal Compensation System at Albert Einstein Institute, Hannover, last year. This summer that I had spent at Caltech as a LIGO-SURF student was a golden opportunity for me to interact with eminent people in this field, learn new techniques and shape my inquisitive mind.

New techniques are being developed for better alignment of optical cavities in LIGO detectors and characterization of various noise sources, to increase the sensitivity of the instrument. This project involved developing an efficient neural network that can track the motion of beam spot from a video of light scattered from the test mass. A camera with Gigabit Ethernet (GigE) connection has been employed for this purpose. The detected beam spot motion can be mapped onto the motion of the test mass, especially pitch and yaw, and thus, it can be used as a feedback signal to centre the beam spot by controlling the cavity parameters. Therefore, this technique serves as an additional alignment tool.

After my graduation, I would like to pursue PhD in Physics. I’m particularly interested in the field of Optics. This internship gave me a deep insight in my field of interest and inspired me to go ahead with my passion for science.
Expected Graduation in 2019 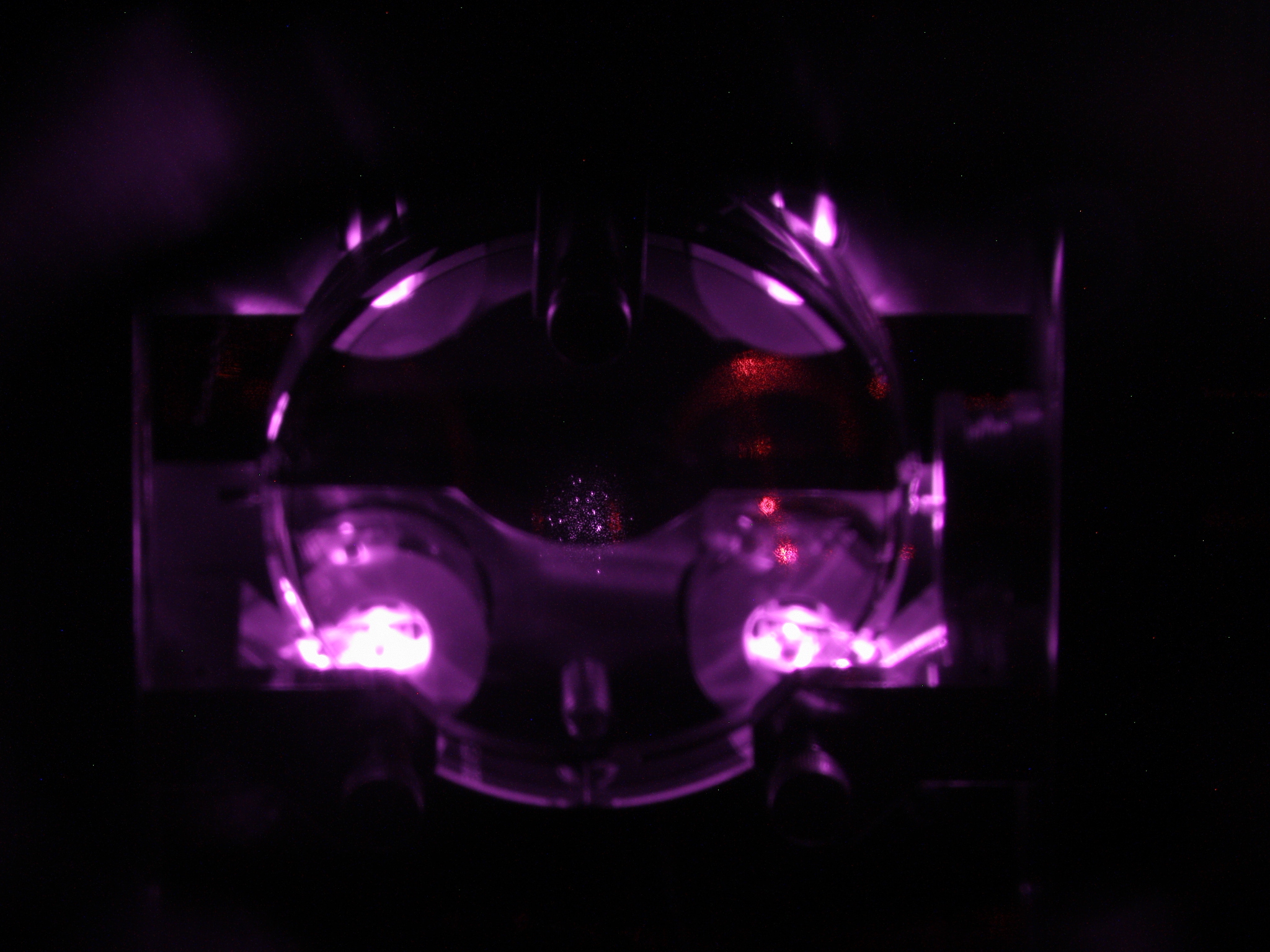 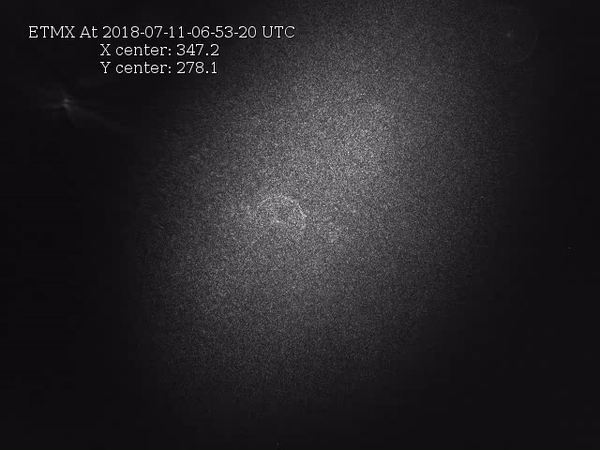